Below you can find useful informational material about the Meeting and Conference:

56th ECCE General Meeting in Dubrovnik, Croatia hosted by the Croatian Chamber of Civil Engineers was organized with great success.

2nd Engineers Day which is going to be co-organized with ECEC  Mr. Vassilis Economopoulos, Chairman of the ECCE Standing Committee on Associate Membership attended also the ECEC GA

ECCE Newsletter December 2012
– A new initiative of ECCE, the issuing of periodic Newsletters.
– The ECCE Newsletter is prepared every two-three months.
– The goal is to bring together periodically the European Civil Engineers and to be aware of their problems and their realizations, organizing a forum of ideas and of news.
– The Newsletter may also act as a mean to send ideas for discussion in Brussels,
Get involved with ECCE Newsletter !

4th Civil Engineering Ibero-American Conference and Council of the Ibero-American Chambers, March 2013, Porto. ECCE President, Prof. Fernando Branco participated in the Congress and in the Council where an agreement was achieved to: “ promote the profession of Civil Engineering and to develop the exchange of professionals and students, among these countries in Europe, America and Africa”

CLAIU – EU Conference – The Bologna Process and the Engineering Education
April 2013, Bologna, Italy
The CLAIU-EU Conference 2013 focused on the achievements of the Bologna process since its first declaration in 1999. The conference was  organised in collaboration with CNI, Bologna University Alma Mater Studiorum and the Library dell Archiginnasio from Bologna.
ECCE Immediate Past President, Mr. Gorazd Humar, was invited to participate on behalf of ECCE. During the opening he welcomed the conference on behalf of ECCE
Prof. Massimo Mariani, ECCE ExBo Member and CNI Counselor, and Prof. Iacint Manoliu, Chairman of SC on Education & Training, participated also in the Conference delivering presentations.

CEMBUREAU event “The Cement Sector: a Strategic Contributor to Europe’s Future” 6 March 2013, Brussels
ECCE was invited to participate in this debate focusing on the competitiveness of the cement industry in Europe. The Boston Consulting Group presented the results of a study on this topic.
Keynote speaker: Daniel Calleja Crespo, Director General, DG
Enterprise and Industry, European Commission
ECCE was represented in this event by the Chairman of the SC on
Development  & Business Environment, Mr. Karlheinz Zachmann.

Agreement of Cooperation between JSCE and ECCE
The Japan Society of Civil Engineers (JSCE) and ECCE will renew their Agreement of Cooperation (AOC) to facilitate the enhancement of the efforts of each organization to better serve the public and the engineering profession.
The signing of such AOC will be implemented in Lisbon.
The Agreement will be signed by JSCE President, Dr. Takehiko ONO, JSCE Executive Director, Dr. Hirofumi OHNISHI and ECCE President and ECCE Vice President/ President Elect.

Standing Committee on Environment & Sustainability
Chairman: Prof Carsten Ahrens
List of responsible persons for E&E in all our national member
associations List of universities/faculties/responsible persons connected
with education and training on E&S Discussion of EU initiative to “making drinking water a market option“
Discussion of non-revenue water, especially in dry countries like Cyprus
Participation as observer in the common EU-project CiTiNZEB

Standing Committee on Education & Training
Chairman: Prof. Iacint Manoliu
“Study on the impact of the Bologna process on civil engineering education and profession in Europe”, to be completed in October 2013. Two questionnaires were prepared for the Phase I of the Study: “Bologna process and the academic world”.
15 ECCE members answered to the survey on the education system and 17 ECCE members answered the survey conducted among academics.
The report on the Phase I of the Study in Lisbon. The Chairman of the SC, Prof. Iacint Manoliu, attended the CLAIU-EU Conference: “The Bologna Process and the Engineering Education” and presented a contribution in which actions taken by ECCE in relations to the Bologna process were underlined.
The SC supports the organization on 14th-15th October in Moscow of the Second Conference of the EUCEET Association with the theme “Civil engineering education: are we meeting the needs of the society and industry?” to be hosted by the Moscow State University of Civil Engineering.

Standing Committee on Development & Business Environment
Chairman: Mr. Karlheinz Zachmann, Vice Chairman: Mr. Aris Chatzidakis
Since 1/7 Lithuania has taken over EU-Presidency. Up to the EU-elections. Greece follows. Activities and initiatives of the EC are dangerously hampered, due to the severe budgetary cuttings by the EU-Council.
ECF continues to meet. A small group has worked out a onepage revision of the MANIFESTO (showing also the logos of all the ECF participants. ECF will plan an event with the EP. FIEC took contact with EPM BÖTIKHOFER. This event may occur just after summer.
Construction out of the crisis: EC installed 3 High Level Fora for elaborating relevant guidelines. 4 Task Forces are actually active

Task Force
Civil Engineering Heritage
Chairman: Mr. Gorazd Humar, ECCE Immediate Past President
During the last GAM in Dubrovnik some elements of the new ECCE book project on Footbridges were evidenced and established. The Editorial Board was completed with some new members.
All the elements of the new book project were defined, especially the content of the book and the quality of photographs.
During last six months several ECCE members worked on the project intensively but not all. At the moment about 40% of ECCE members work on the project which is not sufficient to complete the project within the scheduled deadline. The deadline to prepare the files for each country was consequently extended to end of September 2013. The deadline for presentation of the book is spring 2014.

Photos from the 57th ECCE General Meeting and ECCE/OE Conference: 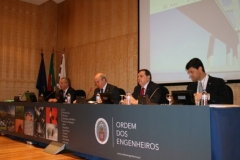 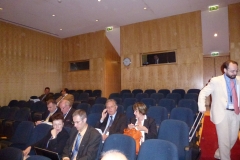 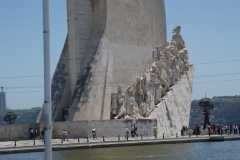 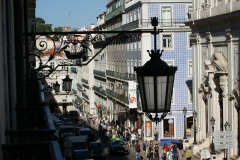